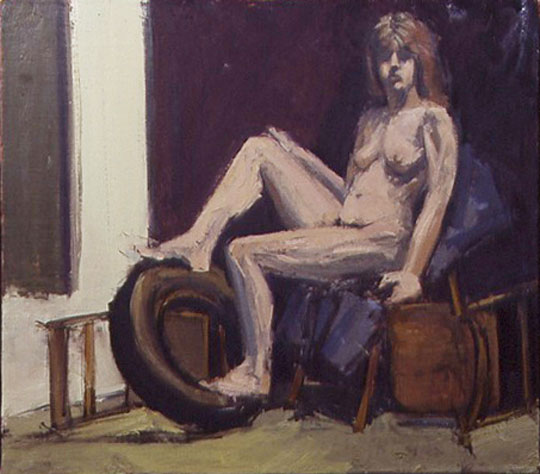 This post marks the 200th publication on the two year anniversary of this blog. The occasion brings to mind another older anniversary. Twenty years ago I quit a perfectly good, well paying, full-time job in corporate marketing graphics. I didn’t quit outright. I took a one-year leave of absence beginning in 1988 to study painting with a teacher in Boston. His six week summer course included the phrase “figure in space.” We would work from long poses three hours each morning, with the option to start a new painting every day or work on the same one for five days. It was exactly what I wanted to do. At the end of the summer, there were enough students interested in continuing that the teacher offered instruction in his studio. When my leave of absence came to an end the following summer, I requested a part-time arrangement from my business manager. She said, “No.” So I said, “No.” There was no plan, no deliberation; I could not go back so I quit.

I studied painting for several years with various teachers, primarily working from the figure. I didn’t become the Bohemian Fauve I imagined might be possible. Or the post-war angst-filled Existentialist painter the first teacher championed. Or even a hip-hop pseudo-slum graffiti art star capturing the urban moment that appealed to mid-1980s gallery directors. But I kept drawing and painting to develop my skills and vision.

To support myself I freelanced in graphic design. However, while I had been out becoming a painter, desk-top computing rapidly took over graphic design and the world as it previously existed. Business became dominated by hardware and software acquisition and training. It was an unfortunate coincidence for me, placing obstacles of time and money in my path. Yet I survived the transition well enough to be doing a version of both twenty years later.

Although not quite. Two years ago in the spring, a friend was diagnosed with cancer. Two other friends died suddenly. All three were around my age, approaching or just past fifty. I decided to take the summer off from free-lancing to write and paint. When it came time at the end of the summer to go back to business graphics, once again I couldn’t do it. I needed to paint full-time. Anniversaries are a reminder of how much has changed and how much stays the same.