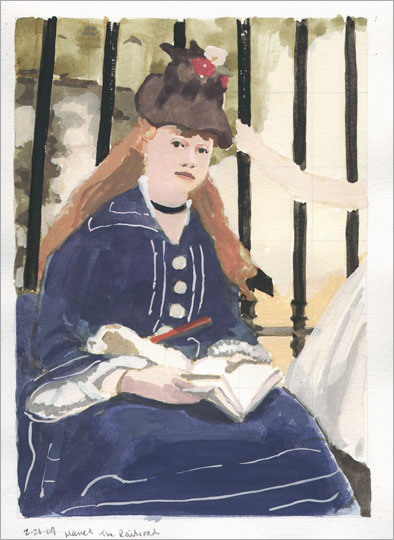 Manet is often referred to as the first modern painter of European art, one of many it turns out, due to both his application of artificially flattened thick, abbreviated paint and for his use of contemporary subject matter. Yet he frequently based his work on well known images from history to convey modernity.

Access to nineteenth century annual and bi-annual exhibitions in Paris was controlled by jurors perplexed and offended by Manet’s art. The era favored subjects of antique, biblical,and historic themes that provided familiar stories and moral lessons, depicted in a smooth, thinly painted, highly detailed style. Awards, from which financial success and recognition followed, were dispensed in accordance preference for this combination of substance and style.

Manet’s painting The Railway, 1873, is ostensibly about the recent development of rapid rail transit. However, the main female figure is nearly identical in pose and accoutrements to an painting done more than one hundred years earlier — the portrait of Nelly O’Brien, 1763, by English painter Joshua Reynolds.

A decade earlier, Manet had caused a sensation when he posed Victorine as the nude Olympia, in a brazen depiction of a high-priced prostitute of Paris’ demimonde. In The Railway, she is shown in matronly garb, with a little girl at her side who is turned away toward the rail yard. Manet’s ambiguous image, lacking stock narrative, suggests the main figure’s persona as a mistress in two ways: her earlier pose as Olympia, and her pose that quotes Reynold’s Nelly O’Brien.

The prevalence and secrecy surrounding courtesans and prostitutes in mid-nineteenth century Paris was in conflict with public moral codes. Putting them forward as subjects of painting further violated the social norms. While nudes were common in academic painting, a premise from Greek mythology was all that was required to transform a nude from salacious to revered.

Manet’s own life, well connected to cafe and theater society, came to an early end from syphilis. His art was more than a stylistic ploy to gain notoriety or destroy craftsmanship in European art. He used well established conventions that his audience understood to communicate his experience, and to expose social hypocrisy along the way. 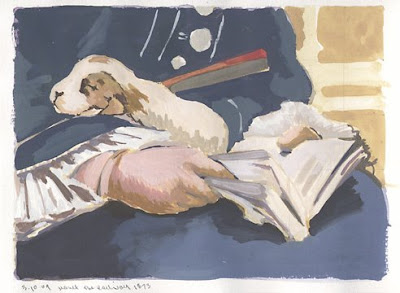