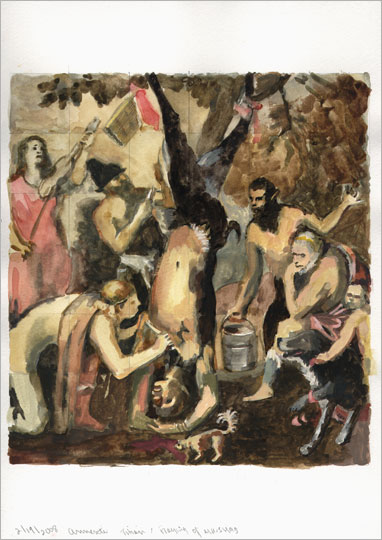 On a cold day in January 1991, I was at the National Gallery in Washington, D.C. to see a large exhibition of paintings by Titian. A week earlier, President Bush announced the first Gulf War in response to Saddam Hussein’s invasion of Kuwait. Two days before the start date 25,000 people were on the mall to protest. This weekend saw 250,000. They carried signs that read “Support Our Troops” and “No Blood for Oil.”

The National Gallery is on the mall. It is a magnificent place to contemplate some of the greatest art ever made in the history of the world. Entrance is free. That day, rooms and hallways filled to capacity with the addition of half-frozen wide-eyed protesters ducking in to warm up. Bundled in coats and scarves, they set their placards on the steps on their way past guards who counted them with tally-clickers as they entered.

The Titian show culminated with the spectacular “Flaying of Marsyas”. The painting traveled all the way from Kromeriz, Czechoslovakia to be included. Not only brilliant in design and handling, the seven by seven foot canvas is also an astonishing physical accomplishment. Titian, whose birth date is uncertain, painted it in the last year of his life at nearly 90 years old.

The painting is a complex work of visual orchestration, compressing an opera-sized drama into a single frame. The satyr Marsyas, having lost a musical competition with his flute to the god Apollo, is shown strung upside down to a tree. Apollo, judged to be the better musician on his lyre, celebrates his victory by flaying Marsyas alive. A small dog licks up the blood and tears dripping from the satyr’s body. Marsyas’s darkened face frames a laser-like glint of light shining from his eye. A muse accompanies the scene on lire da braccio. An aged King Midas looks on, chin in hand, a Titian self-portrait.

There are many scholarly interpretations for the painting’s imagery, none conclusive. The iconography includes Apollo, god of harmony, order, and reason. His detached nature is revealed in the calm way he commits torture. Apollo’s complement is Dionysus, a liberating force of the sensual, physical, and ecstatic, represented in the painting by the satyrs: Pan, god of the fields, and Marsyas. Seen within the context of Titian’s Christianity, the pagan imagery simulates an inverted crucifixion — the Lamb of God patiently suffers to redeem the sins of the world, his soul set free from the mortal coil. Historians have also linked the painting’s subject to Venetian military leader Marcantonio Bragadin, brutally flayed and paraded by the Ottoman Turks on Cyprus in 1571, a conquest that ended western presence there for three hundred years.

King Midas contemplates the contest and suffering between dispassionate god and hubristic artist. As a portrait of Apollo and Dionysus, contrasting intellectual reason with emotion of the senses, the scene enacts the peculiar ability of human nature to commit gruesome acts of brutality while believing them to be rational acts of justice or faith.

On that cold January day, as the U.S. and Iraq made the calculations to go to war, to shed the blood of soldiers and innocents, leading eventually to beheadings, suicide bombings, extraditions, and water-boarding, Titian’s tragic masterpiece collapsed 400 hundred years since its creation, and 1500 before that, into the present moment without missing a beat. 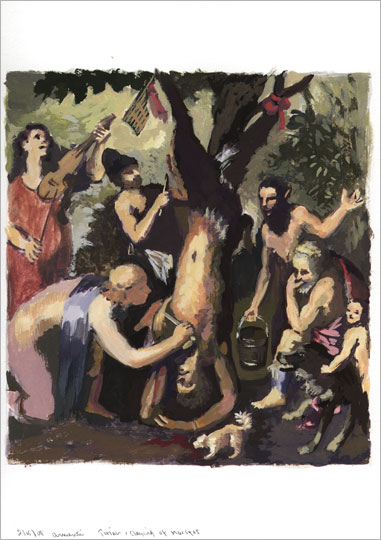 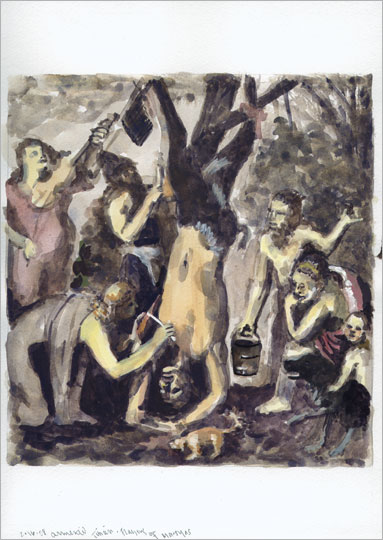 •  Apollo is patron god of music and poetry, and leader of the Muses, who inspire and embody the creation of the arts. Apollo wears a laurel wreath given as a crown of victory at athletic games held in his honor. He is depicted as a beardless, angelic young man.

•  A child next to Midas, contrasts innocent youth with the wisdom of age, rests one arm on a large panting dog, and looks out at the viewer making the viewer a participant in the scene.

•  Midas, king of Phrygia, a region of central Anatolia in modern Turkey, wears a crown of gold. Midas became a worshiper of Pan after regretting his wish to turn everything he touched to gold. The boot fringe of Midas coincides with the large dog’s mouth, making it appear to froth. Midas agreed with the judge’s preference for Marsyas’s playing so Apollo gave him the ears of an ass, not shown in the painting.

•  A man with a knife and apron assists in the flaying. He wears a Phrygian hat, symbol of freedom and eastern influence, similar in appearance to the cap of the Venetian doges, the rulers who had power over Titian’s life and work.