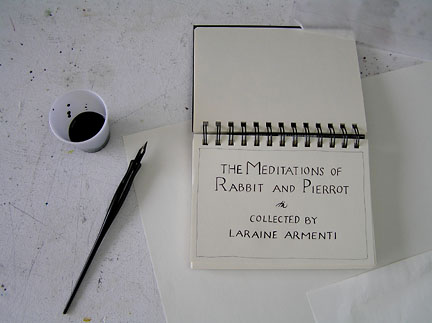 Last summer a friend gave me a hardcover bound sketchbook she’d made using Stonehenge cotton paper for the text block. She recommended pencil, if you don’t erase, and water-based media, for which I chose gouache (opaque watercolor). I began on the second page — my habit for sketchbooks and journals — to do still-lifes using objects already in the studio. As the work progressed, turning the pages of the book contributed to a feeling of narrative. The paintings were unplanned, with no premeditated story.

Beginning on August 12, 2007, I worked from observation in natural light in time limited sessions of one sitting per painting. I painted a few pictures a week until starting a month-long residency at VCCA, when the quantity per day increased, sometimes to as many as four or five, until the last painting on November 2, 2007. There are 42 pages in the book.

In reflecting on what the series was about, I noticed along the way that the characters in the paintings, Rabbit and Pierrot, took poses from my yoga practice. Sketching, drawing, and painting are often meditative processes for me. Still-life is the contemplation of relationships among and between objects. In arriving at a title for the book, I was intrigued by the process of contemplating objects that contemplate themselves and each other.

Later on a selection of the paintings were made into a printed book, The Meditations of Rabbit and Pierrot. The book is a wordless narrative of two characters, a stuffed toy rabbit and a silk costumed doll. Each start out in their isolated reveries until the two characters meet: Rabbit, a happy-go-lucky bon-vivant, and Pierrot, a naive and questioning clown.